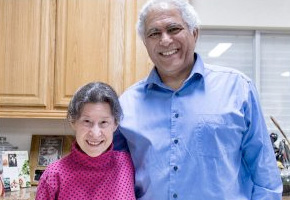 Faye Levy is an internationally acclaimed cookbook author. Most recently she collaborates with her husband, Yakir, who is also their resident photographer. In the book Foodwork: Jobs in the Food Industry and How to Get Them, with a foreword by the late Julia Child, Faye and Yakir Levy were profiled as the role models for cookbook authors.

Faye Levy lived in the Middle East for seven years. Along the way she taught cooking at Montana Mercantile, Let’s Get Cookin’, and other cooking schools, and has demonstrated cooking on national and regional TV. In addition to Feast from the Mideast, Faye has written 22 other cookbooks, including the award-winning books Faye Levy’s International Vegetable Cookbook, Fresh from France–Vegetable Creations, Chocolate Sensations and Classic Cooking Techniques.

Over her long career Faye has written many important articles for Bon Appétit, Gourmet, and other magazines and major newspapers. Faye’s most recent articles, which she wrote with Yakir, were for the Los Angeles Times, the Jerusalem Post and the Orange County Register.

Faye and Yakir highlight an unusual Jordanian restaurant in Los Angeles they enjoy, Oasis Mediterranean Cuisine. They will return to the show before Ramadan to showcase the establishments they dine at in Anaheim’s Little Arabia.

We’re talking about the delights of Middle Eastern cuisine with the very knowledgeable Faye and Yakir.