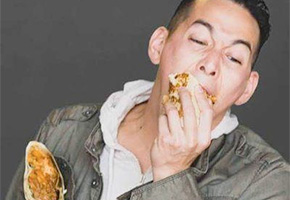 For the entire month of August, FOODBEAST is bringing you SPAM® Restaurant Month! This month-long event showcases the versatility of SPAM® and its place on the restaurant scene nationwide, from fast-casual to fine dining concepts. Think $100 Gold SPAM® Musubis in San Francisco to SPAM® Tamales in Orlando.

FOODBEAST has curated an impressive lineup of concepts across the United States to share their SPAM® creations. Each item is what FOODBEAST likes to call ‘FOODBEAST Approved’ for taste, creativity and newsworthiness, pushing restaurants to unprecedented lengths of SPAM® innovation.

FOODBEAST’s Geoff Kutnick opens the tin for us on these wild chef-driven creations.

For the entire month of August, FOODBEAST is bringing you SPAM® Restaurant Month! This month-long event showcases the versatility of SPAM® and its place on the restaurant scene nationwide, from fast-casual to fine dining concepts. Think $100 Gold SPAM® Musubis in San Francisco to SPAM® Tamales in Orlando.

Good morning, and now a mouthwatering preview of Saturday’s high octane show and not, with apologies, for dieters. With any luck we will always leave you hungry and thirsty. In our case that’s probably a good thing… 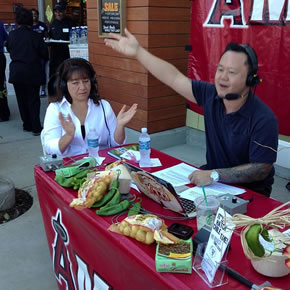 October 3rd was the Third Anniversary of the debut of the “SoCal Restaurant Show” on AM 830 KLAA. Thanks to the original co-host, Chef Jet Tila for getting the show launched and sticking around for almost two years when he really didn’t have the time to do so. A tip of the toque to Chef Andrew Gruel for becoming our permanent Guest Host for the last year. Chef Andrew is back in studio on Oct. 24th. Also we wouldn’t be on the air without our two gracious Presenting Sponsors, Melissa’s World Variety Produce and West Coast Prime Meats. We’re grateful for your loyalty and continued support.

One of the foremost and most influential restaurateurs in New York is eliminating tipping. He’s starting the rollout of this ambitious program with his two-Michelin star restaurant located in a prestigious art museum. What do you think ? We’ll talk about this in the coming weeks…

FoodBeast’s inaugural OOZE FEST in Santa Ana was a gooey mess. That’s all good…We’ll find out with FoodBeast’s Geoff Kutnick which edible was the “People’s Choice” favorite as well as the “Best in Craft Beer.” The attempt at the World’s Tallest Grilled Cheese Tower made it to an impressive 18 feet!

Fosselman’s Ice Cream Co. “Using the finest ingredients available to make the most delicious ice cream” has been a local favorite since 1919. The ice cream is still handmade in small batches in Alhambra. Fosselman’s has just introduced a flavor line of soft serve ice cream for restaurants. Co-owner John Fosselman joins us with all the decadent details.

Gourmet food trucks are the norm in California these days but the evolution (and legalization) in Montreal and Quebec Province, Canada was a much more recent development. Quality trucks there now prepare such eye-popping delicacies as foie gras poutine which is an incredible item ! The co-founders of the very organized Quebec (Canada) Street Food Association (Guy Vincent Melo & Gaelle Cerf) are with us to report on the recent developments. They also coordinated the food and related events at the recent YULEAT Festival over Labor Day Weekend at the Old Port of Montreal.

The 13th Annual Celebrate The Craft Festival is coming to The Lodge at Torrey Pines on Sunday, October 25th from 11:30 p.m. to 3:00 p.m. A star collection of local chefs, farmers, ranchers, vintners and brewers come together for this eagerly anticipated annual celebration of the very best of California’s culinary offerings. Executive Chef Jeff Jackson of The Lodge at Torrey Pines has the tempting preview.

Proprietress & Matriarch Zov Karamardian and Culinary Director Louie Jocson of Tustin’s Zov’s Bistro presented a sold–out dinner at The James Beard Foundation in Greenwich Village on October 6th. We’ll hear about this very special experience. If you didn’t make it to New York, Chefs Zov & Louie are presenting a festive menu on Wednesday, October 21st with a salute to California’s family-owned Cakebread Cellars in Napa. They celebrated their 40th Anniversary in 2013.

The Careers through Culinary Arts Program (C-CAP) provides culinary training and scholarship opportunities for at-risk high school students interested in pursuing careers in the culinary arts. For some 20 years Mitzie Cutler has directed the Southern California program. She has recently transitioned to volunteer status working on special projects. C-CAP has organized a dinner in her honor to benefit the new Mitzie Cutler Scholarship Fund to provide high school students in the Los Angeles area the opportunity to attend culinary college and/or postsecondary school. The multi-course, wine-paired sumptuous repast will be presented at The Jonathan Club’s Rooftop Garden and in the Members’ Dining Room on Tuesday evening, Oct. 20th under the direction of their acclaimed Executive Chef, Jason McClain. C-CAP’s L.A. Director, Lisa Fontanesi, and Executive Chef Jason McClain join us with the mouthwatering specifics.