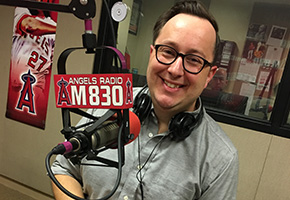 Additionally Farley is the author of Los Angeles Street Food: A History From Tamaleros to Taco Trucks, a book about the long, winding saga of street food in Los Angeles. Find him all over the internet at @overoverunder.

Farley joins us to discuss how he is covering the restaurant business during the unprecedented Covid-19 crisis (with Stay at Home) and graciously shares some insider insights on how restaurants are coping and also still generously giving back to their communities.

He is also the author of well-received Los Angeles Street Food: A History From Tamaleros to Taco Trucks with Foreword by Bill Esparza. Farley’s work appears nationally in the online, print, and digital video space, and you can follow him around the internet at @overoverunder.

We’ll get the latest news on the greater L.A. dining scene with Farley including what’s on the top of his list for significant restaurant openings in the new year.

We’re starting off big with the 40,000 sq. ft. The Manufactory soon to launch in phases at Row DTLA in Downtown Los Angeles. 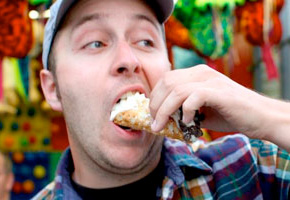 Food journalist Farley Elliott is the Senior Editor for Eater L.A. He typically contributes six pieces a day, five days a week to this very widely read on-line magazine and newsletter. He continues…

There were, unfortunately, some big restaurant closings late in 2018, too. Probably the most sudden was Chef Scott Conant’s The Ponte (in partnership with restaurateur Stephane Bombet) on Beverly Blvd. in L.A. in the space that was previously Terrine. Bombet hasn’t revealed what his new concept for that location will be…

Farley is part of an upcoming panel, “PR Bootcamp for Restaurants : In Memory of Fifi Chao” that will a program at the upcoming Western Foodservice & Hospitality Expo on August 19th at the L.A. Convention Center. We’ll chat about the panel and the latest news of the L.A. dining scene with Farley.

Farley talks about some major restaurant openings on the horizon. In the Arts District of Downtown he has his eye on Simone from Chef Jessica Largey (ex-Manresa) and Chicago’s Stephanie Izard who is bringing her acclaimed Girl and the Goat to L.A. next year.

Eater LA publishes a helpful daily newsletter that’s free for the asking. Sign up on their Website.

For 3 plus years food journalist Farley Elliott has been the Senior Editor at the highly influential Eater LA, part of the 27 City Eater network.

Farley’s work appears nationally in the online, print, and digital video space, and you can follow him around the internet at @overoverunder.