Our own Chef Andrew Gruel is no stranger to the intricacies of seafood. Smoked fish is pretty simple, right? Not exactly.

Was that lox you just enjoyed prepared by hot or cold smoking? What’s the difference? It can be an elaborate process. What techniques are possibly correct for different types of fish? A measure of smoked fish adds flavor & complexity to any number of dishes.

Chef Andrew explains with a promise of no smoke. 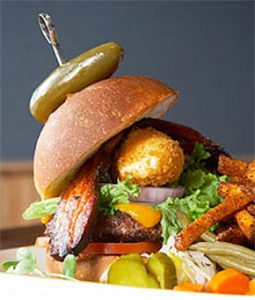 Chef Jet was in Dallas earlier in the week and we asked him to profile one Dallas restaurant that really stood out. He was quick to mention Smoke. They have an in-kitchen wood grill and smoke pit. Chef Tim Byres’ slogan for Smoke is “Homegrown, Handmade, Local, Eats.”

Jet commented on the differences between the dining scene in Houston versus Dallas.

Jet then asked Producer Andy what his favorite bite of the week was. Andy responded that it was the Turkey Pastrami Melt on sourdough bread with Cambozola Blue-Brie, house pickled veggies, and Stout mustard served with a ramekin of Russian Dressing spiked with horseradish at The Tripel in Playa del Rey.