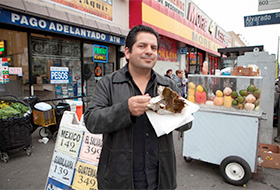 Bill Esparza was inspired to begin his extensive field research into the foods of Tijuana and Northern Baja from the writings of food journalist Barbara Hansen, the long-time Food Section staff writer for the Los Angeles Times. Currently she contributes to the “Squid Ink” Blog as part of LA Weekly.

Bill also leads escorted food tours of Tijuana and Northern Baja for journalists and the public alike. He’s given advice to Travel Channel’s Andrew Zimmern, among other notables.

On Sunday, June 23rd he’s hosting LA Weekly’s TacoLAndia Tacofest from Noon to 5:00 p.m. on the parking lot of the Hollywood Palladium. Celebrated taco makers from some thirty restaurants from as far away as Ensenada will be serving their tasty creations.

Regular admission is a bargain at $20 per guest. VIP which includes tastings of libations at the hosted bar is $40.00.