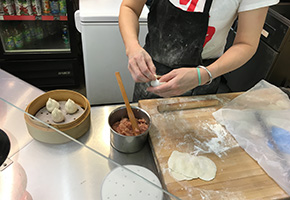 “The SoCal Restaurant Show” is going international. On Saturday morning, January 28th the show is live from Richmond, B.C. (“Where the Far East Meets the Canadian West Coast”) for their festive celebration of Chinese New Year.

Now am enticing preview of that Saturday’s fully-loaded show with Co-Host & Executive Producer Andy Harris. It’s not, with profuse apologies, for dieters. If we’re successful we will always leave you incredibly hungry and thirsty. In our case that’s actually a pretty good thing…

Executive Chef Danilo Ibarra of the Marriott Vancouver Airport Hotel in Richmond. B.C. oversees The American Grille, The Lotus Land Lounge and all other food and beverage provided on-property. We’ll meet him.

Dominique and Cindy Duby are the Chief Chocolate Officers of Richmond’s one-of-a-kind boutique chocolatier, Wild Sweets. They join us in sweet conversation.

Executive Chef Angus An is the proprietor of Maenam, Vancouver Magazine’s selection for 2016 Restaurant of the Year and as the perennial Best Thai Restaurant. He’s had the honor of cooking at the James Beard Foundation in New York. We’ll talk about the flavor balance of Thai cuisine with Chef An as well as his growing restaurant empire.

A popular visitor attraction in Richmond is the River Rock Casino Resort located on the Fraser River. There are eight tempting dining options there including the fine-dining Tramonto and Chinese specialties at Sea Harbor Seafood Restaurant. Karsten Purbs, River Rock’s Food & Beverage Director, is our able guide.

Chinese, Taiwanese, Indian, Greek, Thai, Japanese, Italian – diners can enjoy authentic and delicious culinary styles from across the globe, without ever leaving Richmond. Richmond is home to more than 800 restaurants, half of them Asian and many highly acclaimed. Local food expert Lee Man, founding judge for the Chinese Restaurant Awards, joins us with commentary on Chinese New Year and the diversity of appealing cuisine in Richmond.

There is a burgeoning local wine industry in British Columbia. Sommelier Rachel von Strumer is a passionate wine writer who divides her time between Vancouver and the Okanagan Valley (where 80 per cent of the wine grape plantings in B.C. are located.)