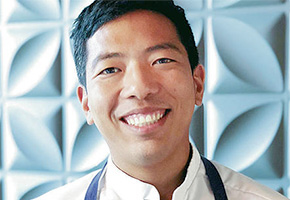 “The three finalist Team USA 2021 teams competed over a five hour and 35 – minute period, following the rigorous format of the actual Bocuse d’Or competition. The platter theme was Whole Chicken, from Palisades Ranch in California, and the plated theme was Ratatouille.”

“Chef Jeffery Hayashi and Commis William Barrera will now begin the rigorous journey to the Bocuse d’Or as Team USA 2021, relocating closer to the training facility at Copia in Napa, California and dedicating the next fourteen months to prepare for the 2021 competition. During this crucial training period, Ment’or will support Team USA, with the Foundation’s esteemed Chef Council continuing to play an invaluable role in mentoring them.”

“I feel very fortunate for this once in a lifetime opportunity,” shares Chef Hayashi, who previously competed for Team USA in 2019. “Any one of the competing chefs could have won. To now officially be on the road to Lyon for Bocuse d’Or is surreal, and I’m incredibly thankful for all the support.”

“Hayashi, originally from Oahu, moved to Arizona at age four and spent the bulk of his upbringing on the mainland, though visited his grandparents in Hawaii throughout his childhood. While culinary arts were not his passion in his formative years, he spent his time focused on building, art, and creating things with his hands, which led him to study architecture at Arizona State University. After realizing that architecture wasn’t his path, Hayashi serendipitously was introduced to French-Australian Chef Philippe Padovani, who had made a name for himself in Hawaii. Philippe, who had learned cooking by fire in the kitchen, encouraged Hayashi to come and work for him as an apprentice, as Padovani opened his namesake, Padovani Grill. Hayashi, who had never worked in a kitchen before but liked hand crafts, worked for Padovani as an apprentice for a year and a half before moving to Vintage Cave as a commis under Chef Chris Kajioka.

“Kajioka then convinced Hayashi to join him on the team for Chef Mourad Lahlou’s new restaurant in San Francisco, Mourad, in 2014. Hayashi worked as Executive Sous Chef at Mourad for four years, at which time the restaurant earned one Michelin star, among other awards and accolades for its Moroccan fine dining cuisine. In 2018, Hayashi headed back to Hawaii to work at Senia, the elevated Hawaiian restaurant opened in 2016 by both Kajioka and Chef Anthony Rush, where Hayashi served as the Chef de Cuisine.”