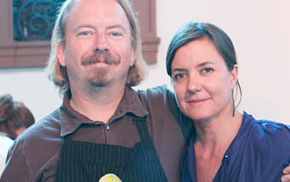 Chef Neal Fraser (bld and Fritzi Dog at the Original Farmers Market) and his wife and business partner, Amy Knoll Fraser, have had their eye on Downtown Los Angeles since before they closed Grace in the Fairfax District in 2010. Their first move was to become one of the official caterers for Vibiana, the home of L.A.’s former historic Catholic Cathedral (Cathedral of Saint Vibiana) dating back to 1876 and now a busy special events and performing arts space.

Eventually they moved their catering kitchen to the site and became the official solo caterers for the facility. Redbird (a partnership with restaurateur Bill Chait) is their new, eagerly anticipated “New American” fine-dining space located on one floor of the former Rectory building (built in the early 1940’s.) The space has been artfully restored and renovated keeping as many of the distinctive historical elements intact as possible.

The main dining room is actually a cleverly designed atrium space that has been weatherized for all-season indoor dining. The appealing long bar is actually two-sided. One side faces the dining area and the other side (with a marble bar) fronts the entrance reception area and lounge. It’s dinner only for the moment with lunch and brunch to follow soon.

The restaurant entrance (and valet) is located on the Second St. side of the building. It’s the only door/entrance on the South side of the street in the block.

The event space itself is in the former cathedral.

Amy Knoll Fraser is our guest.