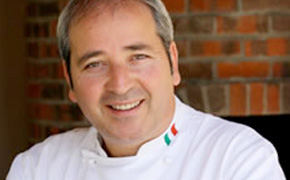 Beverly Hills is one of the toughest, and most unforgiving, markets for sophisticated dining in Los Angeles County. It’s hard to imagine thinking about quality Italian cuisine in Beverly Hills without mentioning il Pastaio, the celebrated Italian restaurant in the city’s center. For 21 years now, il Pastaio has served as an important gathering spot for locals as well as a place for celebrities to be seen. And for all of these years, one man has run the kitchen with an extraordinary eye for detail : Owner/Chef Giacomino Drago.

In Beverly Hills with its fickle clientele, it’s never easy to keep patrons happy. That Giacomino has consistently pleased his demanding customers for over two decades is a feat to be lauded. It’s clear something special is happening in the kitchen. Daily fresh-made pastas, traditional risottos, salads with Italian staples like artichokes, lentils and aged Parmesean, and entrees, including whole Branzino prepared simply with lemon, butter and capers. These are just a few of the fresh flavors that emerge from Giacomino’s kitchen.

Chef Giacomino is our guest.