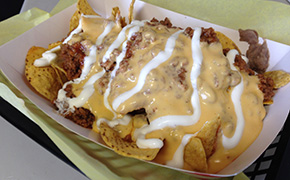 The fondly remembered Naugles fast food restaurant chain was founded by Dick Naugle in 1970 in Southern California with 225 locations prior to merging with Del Taco in 1988. Sadly, Naugles lasted only 7 years on its own after that. It featured an American and a Mexican kitchen. Popular items included the cheese burrito, the bun taco, the combo cup with tortilla chips, the Naugleburger, the Ortega burger and more.

A new business group formed in the last few years has been patiently working on bringing the chain back. The group recently opened a corporate kitchen with plans to expand to more locations. It’s open for service on Weekends.

This effort is not affiliated with Del Taco nor with any other prior owner of the brand. The mission is reviving the original concept with a new company.

In 2014 Gustavo Arellano, the editor of OC Weekly and the author of a highly regarded book on the history of Mexican food in America, recognized the new Naugles as one of his “5 Favorite Restaurants of 2014.”

“So Naugles isn’t technically a restaurant again yet, but the effort by a Naugles fan to bring back the legendary Mexican fast-food chain from the archives of Del Taco is not only a great story, but a delicious one. Are the meals Taco Maria-worthy ? Absolutely not. But they did teach me why people get so crazy over the popups. Go to the next one. Get a simple bean-and-cheese, and you’ll tell me what’s up.” Gustavo Arellano.

This unusual grass roots revival is an incredible comeback story and we’ll meet the architect of it all, Christian Ziebarth along with his Chef, John Smittle (who credits Chef Alan Greely as a mentor).