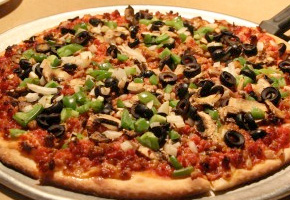 The annual Dine LBC – Long Beach Restaurant Week is taking place April 23 – May 1, 2016. Each participating restaurant from twelve unique neighborhoods in the city offers a three course menu priced at $20, $30, $40 or $50, either per guest with wine pairing options at fine dining locations OR dinner for two priced at $20, $30, $40 or $50, where diners share an appetizer, each enjoy their own entree, then share a dessert at more casual establishments.

In 2004 Rochelle Kenyon retired, and the restaurant came under its current ownership.

Proprietor Mike Rhodes continues the traditions that have become synonymous with Domenico’s. The original recipes are still being followed, and its business has grown to new heights. The menu now also includes many delicious pasta dishes including Sausage Tomato Cream, Chicken Basil Cream, Angel Hair Chicken Fresco, and much, much more.

The pizza dough is prepared fresh daily as well as the marinara sauce and salad dressings. Even the signature Tiramisu is created in-house.