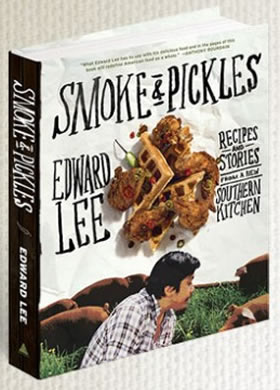 Chef Lee’s first cookbook is Smoke & Pickles. It was nominated for a James Beard Award. It’s a very honest portrayal of Chef Ed’s career to date.

He shares a particularly humbling moment of terror from his past in New York. Chef Jeremiah Tower from San Francisco (an imposing man) happened into his little restaurant in New York for a meal. Tower cooked for Alice Waters early in the history of the iconic Chez Panisse in Berkeley and had a very successful restaurant of his own in San Francisco, Stars, in the 90s. It was the Spago of it’s day in the Bay Area. It was obvious to Ed that Chef Tower was totally underwhelmed with the experience. That moment of abject terror created the path and motivation for Ed to become a better cook.