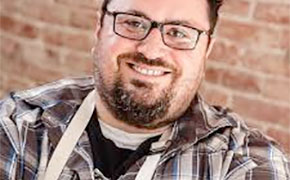 The Emmy and James Beard Award-winning series will follow 15 diverse chefs from across the country as they battle it out for the coveted title amid the breathtaking landscapes and thriving culinary scenes in Denver, Boulder, Telluride and Aspen. Host Padma Lakshmi, head judge Tom Colicchio return to the judges table alongside Gail Simmons and Graham Elliot.

For a sneak peek, visit the Bravo’s Top Chef site.

Born and raised in northern New Jersey, Bruce Kalman has spent almost his entire life working in kitchens. His culinary career began at a local pizzeria owned by a family friend, where he fell in love with fresh ingredients and the beat of the kitchen. He attended a small hands-on culinary program at Hudson County Community College in Jersey City, NJ, where he began to hone his skills and perfect his simple approach to great food.