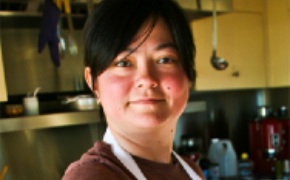 As a teenager Alger snuck into the kitchen at CITY restaurant to begin an informal apprenticeship. That was the start of her long association with Susan and Mary Sue. She eventually rose to the post of Corporate Chef for all of Mary Sue’s and Susan’s restaurants.

Kajsa was on the Street project since the inception. There were months of intense recipe testing before the opening in 2009.

Kajsa is particularly proud of the unconventional Saturday and Sunday brunch menu they are offering until the end of the month. It’s an “All You Can Eat” small plate brunch with breakfast items as well as sandwiches and salads. It’s a modest $25 per guest and for an additional $15 you can partake of bottomless sparkling cocktails.

Kajsa pointed out that Street is vegetarian and vegan friendly. Some of their vegan specialties are that way by the simple nature of the dish. Ethnic fare tends to be less meat centric and they have built upon that.