It’s not well known outside of the local restaurant industry that the late Henry Segerstrom (the patriarch of developing South Coast Plaza in Costa Mesa) was a champion of chefs and restaurateurs. He truly enjoyed dining out. There are some memorable stories over the years about rising star chefs and restaurateurs being the beneficiaries of Mr. Segerstrom’s largesse. This morning we’ll hear a few of these inspiring, and revealing, stories shared by the people who actually lived them.

In the words of Chef Gavin Kaysen: “In the past year, I’ve left New York City where I had the pleasure of cooking alongside Daniel Boulud running his Café Boulud brand; opened Spoon and Stable in my hometown of Minneapolis; served as the head coach for Team USA as we won a record-breaking Second Place in the Bocuse d’Or; and led my restaurant to become a semifinalist for Best New Restaurant from the James Beard Foundation Awards. I’m looking forward to sharing the next steps of my journey with you.” Chef Gavin Kaysen joins us.

EAT LBC – Long Beach Restaurant Week returns for its big 2nd year from March 22nd to March 28th. One of the participating restaurants is Callalloo Caribbean Kitchen which made a big impression at the inaugural event’s kick-off party last year with their cravable Jerk Chicken. Proprietor Hamid Latiff Jr. is from Trinidad and is out guest.

He likes to describe his cuisine “beach food.”

In 1977 veteran restaurateur Antonio Cagnolo (Antonello Ristorante) met Henry Segerstrom for the first time. He was the new assistant manager at the fine-dining Alfredo’s which was part of what is now the Westin South Coast Plaza. Mr. Segerstrom greatly appreciated Antonio’s gracious Italian hospitality and his innovative table-side service. A friendship blossomed. Antonio Cagnolo joins us to share the story of how Antonello Ristorante came to be at the South Coast Plaza Village in 1979 and other ventures thereafter.

The acclaimed French chef, Florent Marneau, was the opening Executive Chef for Joachim Splichal’s first restaurant in Orange County, Pinot Provence at the Westin South Coast Plaza. He attracted deserved raves from the critics. In the mid-2000’s Chef Florent and his wife, Amelia (a talented pastry chef in her own right) were contemplating a restaurant of their own. Henry and his son, Anton, were fans of Chef Florent from Pinot Provence and doing some private functions for the Segerstrom Family. Chef Florent is with us to share the story of how Marche Moderne at South Coast Plaza in the Penthouse was born in 2007. It’s unusual for an entrepreneurial husband-and-wife team to be given such an incredible opportunity. Their 8th Anniversary is in April.

In March, ADYA Executive Chef/Owner, Shachi Mehra, will introduce four weeks of special curries in an effort to highlight India’s regional culinary styles and provide guests with a delicious, in-depth look at India’s culinary diversity. The curries will feature ingredients and styles of cooking unique to each region, from coconut and curry leaves, to poppy seeds and mustard. Chef Shachi is with us to explain it all.

You never know who you may be talking to (or the future impact that casual conversation might have) as Craig Nickoloff (the Founder of Claim Jumper) found out on a breezy Fall Sunday afternoon in the late 90s at South Coast Plaza Village at the finish of a multi-day antiques’ show. The person that Craig Nickoloff inadvertently befriended was the late Henry Segerstrom’s elderly (but spry) Mother. This ultimately led to the establishment of a Claim Jumper, their flagship, at South Coast Plaza in 2003. 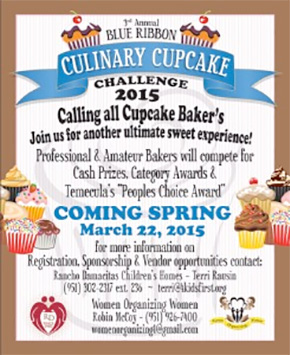 The 3rd Annual Blue Ribbon Culinary Cupcake Challenge 2015 is March 22nd from 1 to 4:00 p.m. at the Grand Ballroom of the Pechanga Resort & Casino in Temecula. Professional and amateur bakers will compete for cash prizes, category awards and Temecula’s “People’s Choice Award.” Admission, including tastings, is a modest $25.00 per guest. The charitable beneficiary is Rancho Damacitas Children & Family Services.