“From pioneering cider sommelier Dan Pucci (called “the hype man cider is lucky to have” by Eater), and food writer and restaurant owner Craig Cavallo comes AMERICAN CIDER: A Modern Guide to a Historic Beverage (Ballantine Trade Paperback Original.) The first of its kind, the book chronicles the history of cidermaking in the United States, offering essential knowledge on what to drink and where the cider market is heading.”

“Cider today runs the gamut from sweet to dry, smooth to funky, made with just apples or joined by other fruits—and even hopped like beer. Like wine, ciders differ based on the apples they’re made from and where those apples were grown. In AMERICAN CIDER, experts Pucci and Cavallo give a new wave of consumers the means to taste, talk about, and choose their ciders, along with stories of the many local heroes saving heirloom apples and producing innovative, new varieties. By combining the tasting tools of beer and wine, Pucci and Cavallo illuminate the possibilities of this light, flavorful, and naturally gluten-free beverage.”

“Not to mention, cider is more than just its taste. It also has deep roots in American history, as the nation’s first popular alcoholic beverage, originally made from apples brought across the Atlantic. The authors employ a region-by-region approach to further illustrate how ciders and the apples they’re made from came to proliferate the U.S.—including demystifying Johnny Appleseed (spoiler: it’s not what you think) and the surprising effects of industrial development and government policies that benefited white men on apple production.”

“Not simply a guide to drinking, AMERICAN CIDER is at its heart a guide to being part of a community of consumers, farmers, and fermenters taking the nation’s oldest beverage into its bright, booming future as an indispensable American drink.”

Dan tells us a bit about local cider merchant Mark McTavish. One of his cider brands is 101 Cider House.

What’s an apple that grows well in California that makes good cider? We hear about the Jonathan, originally from the Hudson Valley. It’s profile in cider is “often very full-bodied, creamy, and textured with fresh fruit balanced by dried leaves and scrub grasses.” 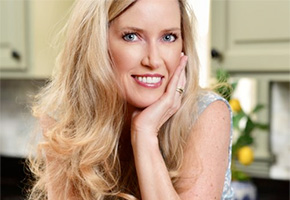 “The recipes include lightened-up Southern staples like lemon squares, gingersnaps, and herb biscuits alongside incredible and surprising combinations of Southern flavors like Pumpkin Cranberry Pecan Bread, Sweet Potato Meringues, and Lemon Blueberry Cream Pie. With a foreword from Marc Summers and sections about making your own nut butters and refined sugar–free jams and fruit butters, Skinny Southern Baking reimagines Southern baking with style and simplicity.”

“Lara Lyn Carter is considered Georgia’s go-to authority on Southern entertaining. She converted to healthy, clean cooking and shares her vast experience and array of healthy Southern recipes in this groundbreaking cookbook, an invaluable addition to any health-conscious kitchen.”

We’re in the kitchen whisking with Lara Lyn Carter.

“The recipes include lightened-up Southern staples like lemon squares, gingersnaps, and herb biscuits alongside incredible and surprising combinations of Southern flavors like Pumpkin Cranberry Pecan Bread, Sweet Potato Meringues, and Lemon Blueberry Cream Pie. With a foreword from Marc Summers and sections about making your own nut butters and refined sugar–free jams and fruit butters, Skinny Southern Baking reimagines Southern baking with style and simplicity.”

“Lara Lyn Carter is considered Georgia’s go-to authority on Southern entertaining. She converted to healthy, clean cooking and shares her vast experience and array of healthy Southern recipes in this groundbreaking cookbook, an invaluable addition to any health-conscious kitchen.” 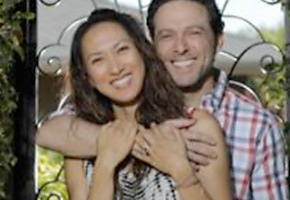 The Kirsh Baking Company of Long Beach launched in May. The mail order bakery concentrates on creating masterfully made cookies. The founders are the husband and wife duo, Pastry Chef Uyen (Nguyen) Kirshenbaum and Jeff Kirshenbaum also a hospitality veteran. Like many who were furloughed during the Covid-19 pandemic, the Kirshenbaums are now pouring their energy into their passion, transforming what were once special-order cookies for those in the know, into a full-fledged business. Chef Uyen’s signature cookies are available for mail order by the dozen.

The line of “Jeff’s Cookies” are a tribute to Chef Uyen’s painstaking efforts to create the perfect gluten and dairy free cookie for her husband. Although she reveled in the reactions of friends, family and other chefs who were shocked to learn her Double Chocolate Chip cookies were dairy and gluten free, the secret is out now! Cookies are carefully packaged by the dozen in beautiful gift boxes.

Chef Uyen takes a pause from mixing cookie dough to join us. 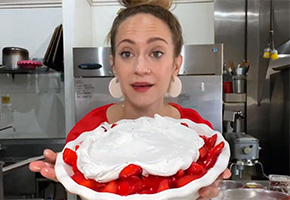 “Creating baked goods for everyone can be a challenge—from dairy intolerances to gluten-free lifestyles, peanut allergies to vegan diets, there are so many factors to consider when trying to come up with something to bake for a friend’s birthday, bake sale, holiday, or just to give someone a treat. Luckily, Angela Garbacz, the chef and owner of Goldenrod Pastries in Lincoln, Nebraska, felt the same way, and in Perfectly Golden: Adaptable Recipes for Sweet and Simple Treats she provides inclusive recipes that are meant to fit any lifestyle, regardless of dietary restrictions.”

“In Perfectly Golden,” Angela puts all the personality, fun, joy, and enthusiasm she puts into her bakery, and she gives the tips and tricks that she has accrued over 20 years of professional baking experience. Rather than just giving the measurements and baking times, Angela’s goal is to have you learn about the process—such as understanding that cookie dough should feel soft but not sticky, or a yeast dough should feel impossibly fluffy.”

“She gives notes on ingredients like flax eggs and non-dairy milks, helps you understand the varieties of gluten-free flours, and she even provides baking tips for troubleshooting information before you’ve started the recipe. Her tips on yeast doughs include understanding when they’re ready to bake, and how to encourage rising. She shares her trick for how to save a cake batter that’s become too thick, after explaining why that sometimes happens, and she explains why some cakes cool in their pans and why some need to be unmolded quickly.”

Pastry Chef Angela Garbacz is our guest, whisk in hand. 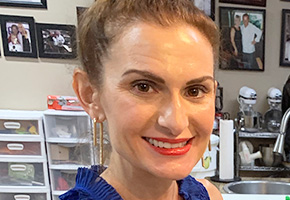 “How does the revised & expanded edition of Clean Eating for Busy Families – Simple and Satisfying Real-Food Recipes You and Your Kids Will Love work?”

“It’s Quick: From easy sautés and casseroles, to slow cooker and one-pan meals, all the recipes you’ll find inside list both mode and length of cooking time, so there’s no time wasted trying to calculate the timing for your schedule. Plus, most recipes can be prepared in 30 minutes or less!”

“It’s Clean: The ever-growing “clean food” movement, which focuses on a healthy, whole foods-based approach to eating, lies at the foundation of this book, so you can be sure you’re feeding your family the very best. From wholesome ingredient lists to nutritional analysis on every recipe, you can feel confident that every meal you prepare is both nutrient-rich and calorie-conscious. Options for plant-based, gluten-free, and dairy-free alternatives are also listed wherever possible.”

“It’s Green: Featuring eco-friendly tips, along with information on how to go green while shopping and cooking, you’ll find it a cinch to keep your family happy and stay eco-conscious.” 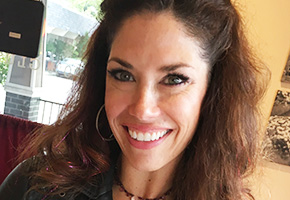 Kyra enjoys the distinction of being the only baker to be a 4 Time Winner on Food Network’s’ “Cupcake Wars.” Keep in mind that’s with gluten-free baked goods. Kyra joins us.

Kyra enjoys the distinction of being the only baker to be a 4 Time Winner on Food Network’s’ “Cupcake Wars.”

“After being disappointed in the gluten-free products that were available on the market, I thought I’d have to live without birthday cakes and scones and doughnuts. I attended the prestigious Le Cordon Bleu patisserie program, which gave me a solid foundation of knowledge about classical French baking techniques, which I applied toward baking gluten-free. By craving, and by necessity, I began experimenting with alternative flours and developed a handful of cake recipes that taste as good, if not better, than traditional wheat-filled cakes.” – Kyra Bussanich

Kyra Bussanich continues with us.

The recipes in this cookbook don’t just “lighten up” Southern food-they offer gluten-free and paleo options as well. It’s the Southern cuisine you know and love, at it’s very finest. Bring on the Shrimp & Grits.

“With 90 reinvented Southern Classic entrées such as truffle and rosemary chicken, or grilled lamb with sweet onion sauce; dabble with the citrus vinaigrette; sample the seafood gumbo, the quinoa salad, or the spaghetti squash with pecan truffle oil and herbs. You won’t regret it!”

“Lara Lyn’s converted to healthy, clean cooking and shares her vast experience and array of healthy Southern recipes in this groundbreaking cookbook, an invaluable addition to any health-conscious kitchen. Get a taste of this satisfying lifestyle with Lara Lyn’s Olive Pecan Dip, Shrimp and Grits & Classic Southern Pound Cake.” 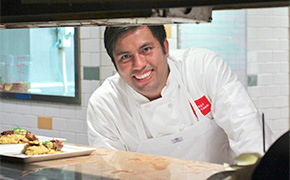 We chatted with Chef Ricardo Zarate recently about his new restaurant in Las Vegas, Once, located at The Palazzo Resort. His new flagship in West Hollywood on Melrose Ave. (launched last June) is Rosaline. It’s dinner and Sunday Brunch.

Here Chef Ricardo takes his guests back to his roots with a menu of classic Peruvian dishes alongside “street-food” fare updated with a California sensibility. Also a ceviche bar.

The restaurant is named after Chef Ricardo’s mother, Rosaline. It’s what he calls the “next phase of Peruvian dining.”

All the menus include vegan, vegetarian and gluten-free-options.