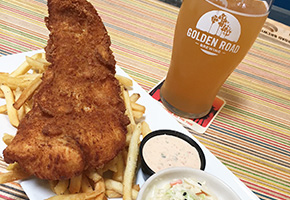 We’re still celebrating the 4th Of July so you’re cordially invited. For today’s show we’re at the Golden Road Pub OC at the Anaheim Golden Road Production Brewery located right across E. Orangewood Avenue from the south entrance to our home at Angel Stadium. At least 35 rotating styles of premium craft beer on tap to sip and savor. Hoppy 4th to all! (That’s a touch of beer humor…) Salud!

Now an engaging preview of this Saturday’s properly effervescent show. It’s not, with profuse apologies, for dieters. If we’re successful we will always leave you incredibly hungry and thirsty. In our case, upon careful reflection, that’s probably a pretty good thing…

It’s now officially Summer and the best of the Summer crop of fresh fruits is now readily available. It’s a bounty of everything from juicy grapes to ripe figs. Our resident produce authority, Robert Schueller of Melissa’s, joins us with an update. Robert is also on stage twice at the Culinary Arts Pavilion in the OC Promenade Building Opening Day at the OC Fair on Friday, July 13th.

One of our favorite OC-based food, libation and travel writers is Anne Marie Panoringan. She recently spent 48 intense hours in the Santa Ynez Valley researching a few of the best picks in food, beverages, attractions and accommodations for a travel piece in the special Summer Travel issue of OC Weekly. Anne Marie graciously shares some of her exclusive finds with us.

Viceland’s “Beerland” just concluded it’s third season of 6 new episodes. This Season Megan Gill, Golden Road Brewing’s Co-Founder, traveled to New Orleans, Canada, San Diego, Pittsburgh and West Texas to find the best-of-the-best home brewers in each area. Then, in the Finale at Golden Road’s production brewery in Anaheim, a team of distinguished judges and Meg tasted the five styles and then decided the winner from among the five geographic finalists. We’re chatting with the winning home brewer. 100 barrels of the winning style were brewed for distribution by Golden Road festively packaged in a special and colorful 19.2 ounce can.

The Meatheads (Terry and Jay) are our resident, well-informed protein experts from West Coast Prime Meats. Jay Henderson joins us to talk about all the hoopla concerning grass-finished and grass-fed beef. How does this differ from grain-fed beef? What’s the flavor profile? What should you know?

We’re initiating a new monthly segment on the “SoCal Restaurant Show” called “Ask the Brewer.” To embark on this we’re delighted to have Golden Road’s highly accomplished Brewmaster, Victor Novak, and Anaheim Head Brewer Steven Torres with us. Beer pairs really well with food. Victor and Steven will provide us with a tall stein of refreshing “Beer Pairing 101.”